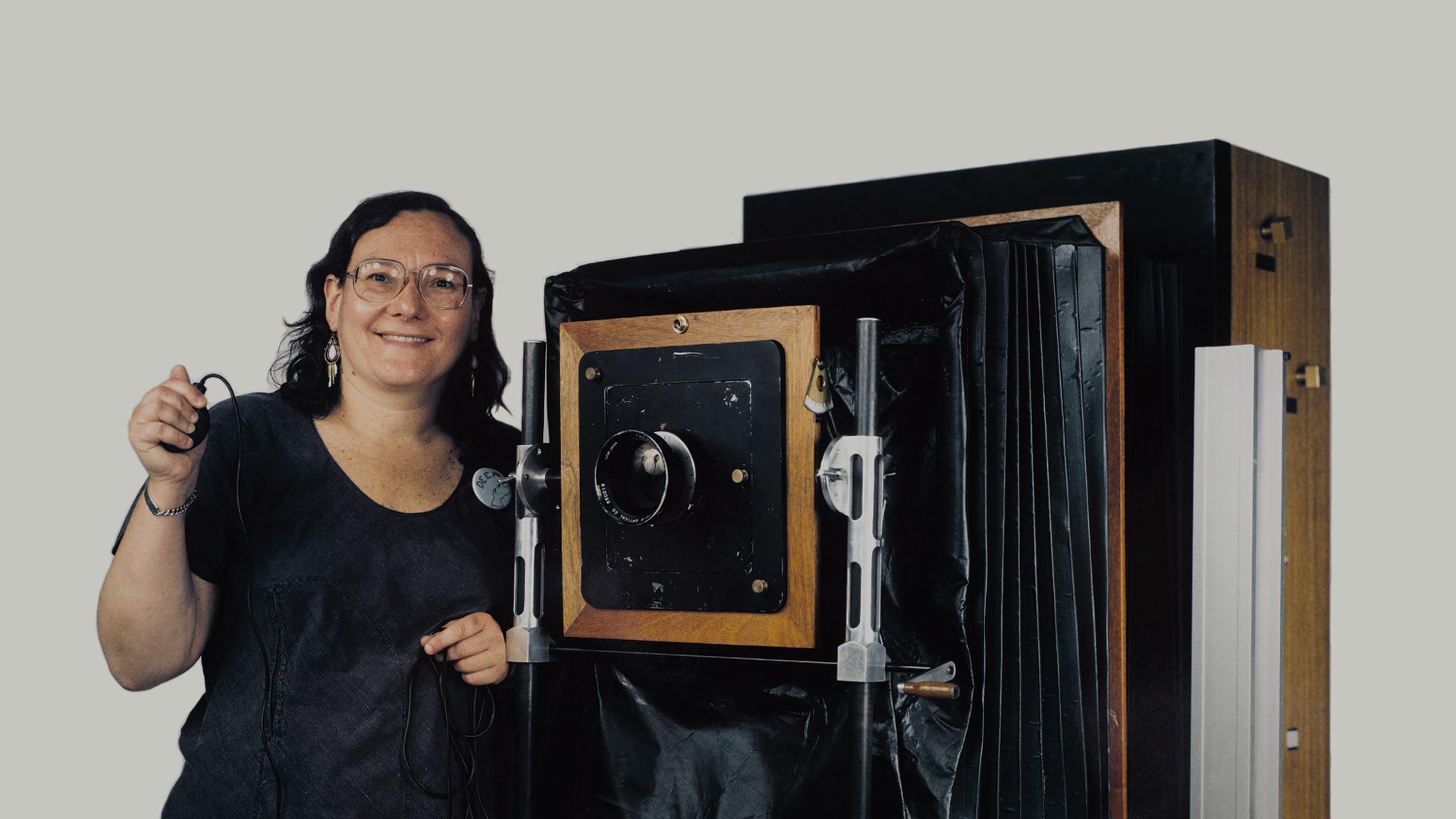 (
)
A look at the life and work of photographer Elsa Dorfman.
Play Trailer

(
)
A look at the life and work of photographer Elsa Dorfman.
Play Trailer

Portrait photographer Elsa Dorfman found her medium in 1980: the larger-than-life Polaroid Land 20x24 camera. For the next thirty-five years she captured the "surfaces" of those who visited her Cambridge, Massachusetts studio: families, Beat poets, rock stars, and Harvard notables. As pictures begin to fade and her retirement looms, Dorfman gives Errol Morris an inside tour of her backyard archive.

In The B-Side: Elsa Dorfman’s Portrait Photography, Errol Morris explores the life of a gifted analog photographer facing a digital present. Dorfman, with whimsical charm and wit, gives her longtime friend a tour of her backyard garage-turned-archive.

Dorfman pulls out portraits one by one and holds them up for Morris—for the first time in recent years without his trademark Interrotron. The result is a surreal show-and-tell, as Dorfman shares the stories behind her photographs and her spontaneous musings on life. "I think one thing about having all the pictures," she says, "is you sort of search for the narrative. But there probably is no narrative. It’s just what happened. It doesn’t go by a script."

The B-Side begins with Dorfman’s personal narrative of her struggle to find an identity as a young woman coming of age in the 1960s. When a colleague presented her with a Hasselblad camera on a whim, Dorfman quickly declared, "I’m a photographer!" Armed with her new camera, she began to photograph her friends at the Grolier Book Shop in Harvard Square—including such writers and luminaries as Allen Ginsberg, Robert Creeley, Robert Lowell, and Charles Olson.

But it wasn’t until 1980 that Dorfman found her ultimate medium: a rare large-format camera devised by the Polaroid Corporation. The instant photographs it produced were enormous—20 inches wide and 24 inches tall—with saturated colors and unparalleled detail. Dorfman was bewitched by the scale and clarity of this magical camera. The B-Side traces Dorfman’s love affair with the 20x24, while also presenting the wide range of formats Dorfman’s portraits and self-portraits haven taken over the years—from early 2-¼" negatives to prints produced by Polaroid’s even larger-format 40x80 instant camera.

Dorfman’s approach to portraits—large or small—is simple. She doesn’t want to plumb the depths of her subject’s souls or "to take more than they’re willing to give." Instead, she and her camera celebrate the people who step into her studio—their surface appearances, personalities, idiosyncrasies, and everyday triumphs. "Life," Dorfman says, "is hard enough. You don’t need to walk around with a picture of it."

Dorfman ultimately reveals a neglected section of her archive in The B-Side. She always took at least two 20x24s per portrait session, but her clients only purchased one. The remaining portrait was "the B-side." Like the flipside of 45s, Dorfman’s B-sides are hidden treasures when revisited. Now, she reflects, her B-sides look "perfectly wonderful."

The B-Side is a loving portrait of a unique artist too often overlooked in considerations of 20th century photography. It revels in the intimate beauty of Dorfman’s portraits and in her singular appreciation for the ordinary aspects of human life. As photographs begin to fade and Dorfman’s retirement looms, Morris’s film reminds us of a bygone era of analog photography and the extraordinary life of one of its champions. 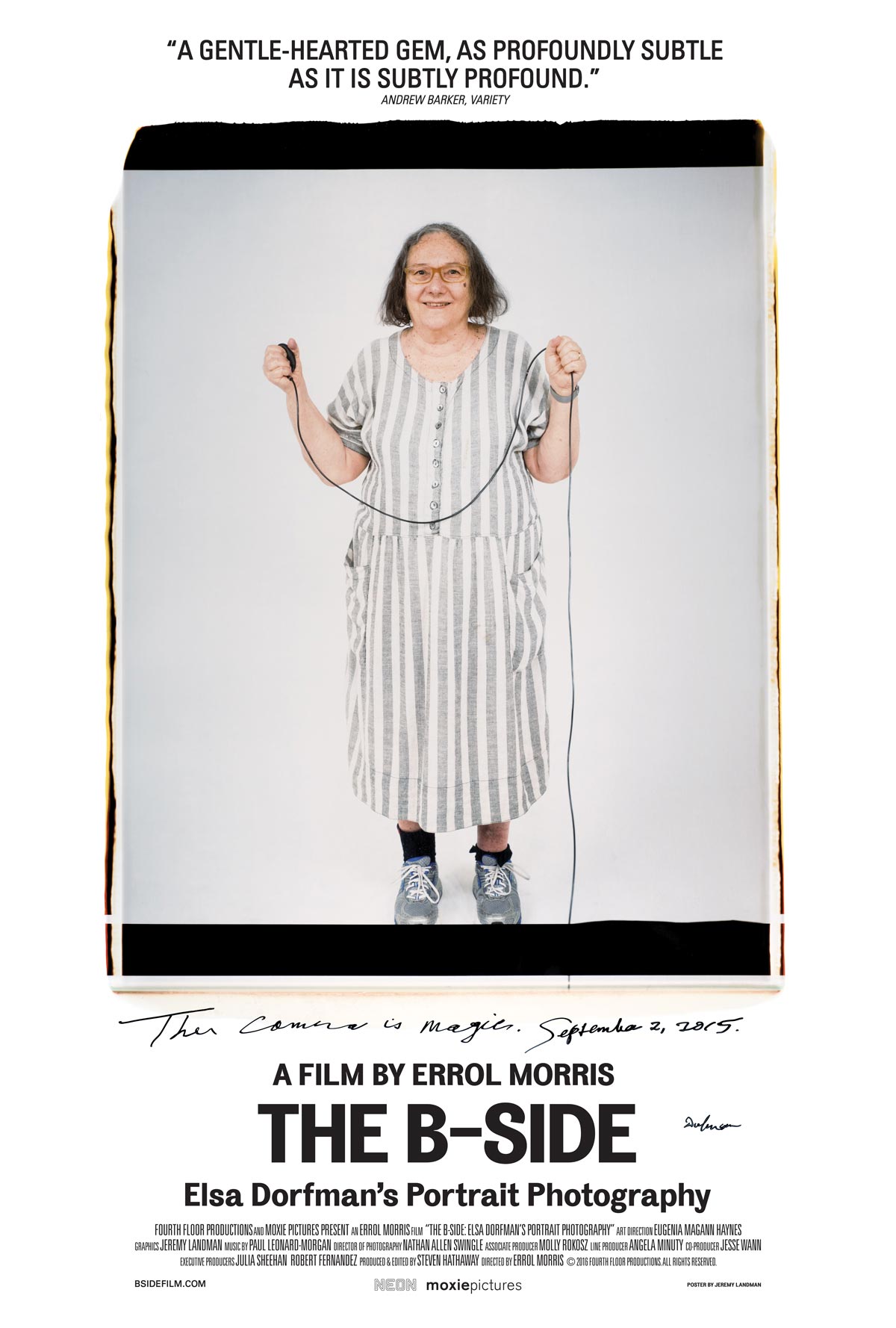